The Ultimate Guide to Buying a Home Flight Simulator PC

A high-quality computer is an essential part of any home flight simulator. It is responsible for powering your flight simulation software and supporting the additional flight sim gear that you purchase. That means the computer you choose needs to meet a long list of technical specifications.

Since there are several flight simulator software providers, the requirements vary for a home sim computer. Let’s take a look at the most popular simulation software products and the computer performance required to use each of them.

Prepar3D is a visual simulation platform from Lockheed Martin that allows users to create aviation training scenarios. It engages flight simulator pilots with immersive environments that also are suited for commercial, academic, professional, or military instruction. Prepar3D can be used to quickly create flying scenarios anywhere in virtual world.

Per the Prepar3D system requirements page 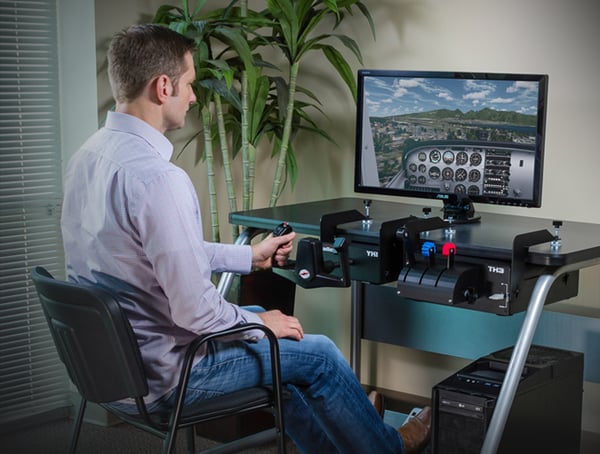 X-Plane 10 provides realistic flight modeling right on your desktop. It is a flexible flight simulator with thousands of compatible add-ons. There are endless territories and aircraft to explore.

X-Plane 10 features a scenery engine for all three platforms, Windows, Mac, and Linux; which includes a uniform lighting system 'that lights a plausible world.’ Created from many real-world databases, the roads and build-up areas appear as they would in real life.

Per the X-Plane 10 system requirements page

X-Plane 11 includes a brand new user interface, a new level of quality in the included aircraft, and support for virtual reality headsets. Some of the general aviation aircraft feature a simulated G1000. Every aircraft cockpit is 3-D and is usable for instrument flight.

Per the X-Plane 11 system requirements page

If you're purchasing your flight simulator computer before your simulation software, then you'll want to make sure your computer hardware does not limit your options. To hit the minimum requirements for all the aforementioned software products, you need a computer that looks something like this:

However, to meet the hardware recommendations of all the flight simulation software developers, you should invest in even more computing power. That way, your computer does not restrict the scenery and aircraft packs you can buy or inhibit a smooth and realistic flying experience. The cost to upgrade your computer hardware can be steep, but you'll get better visuals in return.

Rather than purchasing a new computer or upgrading their current computer piecemeal, many sim pilots elect to buy an all-in-one flight simulator. If you have plans to purchase high-quality flight controls—like a realistic yoke and throttle quadrant—you should explore your options for all-in-one simulators. Generally, since all the flight simulator hardware is included with these devices, complete home flight simulators allow you to save on individual components and they offer other advantages, too.

The Benefits of a Complete Home Flight Simulator

The all-in-one desktop flight simulator is attractive for a few reasons:

With a complete home flight simulator, the effort required to create a realistic flying experience already has been made for you. Assuming the device is high-quality, the flight modeling will be smooth, the position and feel of the flight controls will be realistic, and the display will be effective for visual and instrument flying. If you plan on using your flight simulator to help you get a private pilot license, improve or maintain your pilot proficiency, or just get you flying with minimal fuss, an all-in-one device could be the best home flight simulator setup for you.

With Redbird, the all-in-one flight simulator comes in a few different flavors.

The Jay prioritizes getting the pilot flying in ten minutes or less. It’s an all-in-one desktop flight simulator with no peripherals to configure or systems to install. You simply put it on a table, plug it in, turn it on, and you’re flying in no time. The computer for the Jay comes standard with the following specs:

For student pilots who are pursuing a private pilot certificate and pilots and home sim pilots who want to get flying fast, the Jay provides an economical path to start flying without the time and effort otherwise required to build a realistic home flight simulator setup.

If you want even more computing power, the Velocity edition of the Jay upgrades the CPU to an Intel i7 6400 Quad-Core Processor, doubles the computer memory to 16 GB of RAM, and adds an NVIDIA GeForce GTX 750Ti graphics card. Originally designed for public use, it also includes heavier-duty flight controls that hold up to repeated use by children and new sim pilots. The Jay Velocity runs Prepar3D, but X-Plane will be available in 2020.

The Redbird TD and TD2

If you are a simulator pilot who wants to create an immersive flight training environment at home, the Redbird TD might be the all-in-one device that suits your flight simulation goals. In addition to computing power on par with that of other Redbird desktop devices, the TD features an avionics panel—currently either an analog six-pack or a G1000—that you can interact with during your flight training. With realistic buttons and knobs for the GPS and autopilot, the TD provides haptic feedback while you're flying.

Unlike other desktop flight simulators, the TD has a unique mounting system that allows you to hang the device under a table, placing the yoke, switches, gauges, and visuals in the most realistic position for flying. The Redbird TD2 builds on the features of the TD and enables you to fly high-performance and/or complex aircraft.

While their base prices—$6,995 for the TD and $7,995 for the TD2—likely exceed what a flight sim gamer wants to spend on a simulator setup, the Redbird TD and TD2 are among the best flight simulators to work on your private pilot training, instrument training, and instrument currency from home. Approved by the FAA as Basic Aviation Training Devices (BATD), the TD and TD2 allow you to log 2.5 hours toward your Aeronautical Experience Requirements, 10 hours toward your Instrument Rating, and complete all the tasks required for your Instrument Currency without an instructor present.

If you’re wondering whether a certified flight simulator like the TD or TD2 is the right choice for you, this article should help.

The Limits of a Complete Home Flight Simulator

For most home sim pilots, customization limitations are the downside to all-in-one flight simulators. Since the flight controls are part of the device, you generally do not have the flexibility to switch out your yoke (or flight stick) and throttle.

The same is true with your flight simulation software. To provide realistic flight modeling, complete home flight simulators generally run on a single simulation engine. That means that you are committed to one software platform and you will need to buy a new device to run a different one.

If you want to build a highly customizable home flight simulator, a desktop computer with separate flight control products probably is the best option. That way, you can configure your flight controls to your liking and fly Prepar3D, X-Plane, and—very soon—Microsoft Flight Simulator 2020.

We're happy to help. Give us a shout and we’ll help you find a home flight simulation solution that fits your goals.