How to Get Into the Flight Training Mindset

“Frightened human beings will only do what they're trained to do....
You don't rise to the occasion. You sink to the level of your training.”
- Lt. Col. Dave Grossman

Training can be as much art as science, but the science certainly can guide us. Performing well under stress requires focus, confidence, and commitment. All of us can have a bad day flying; even so, "it is unacceptable not to train, not to try to get better, not to use the resources available to make sure that what caused that bad day never happens to you again."1

Training time is finite. Consequently, we need to realize that all training has an opportunity cost. Hence, training should focus on building the basics "to a usable level, increase the toughness and realness of conditions, pressure test it and see what holds up and what doesn't, then work back through the basics again building them to a higher level."2 In the scheme of Aviate-Navigate-Communicate, for example, poorly executed turns and fumbled radio calls on the same flight do not deserve equal remedial training time. Improve the stick and rudder skills first, then increase the difficulty by reintroducing communication skills. 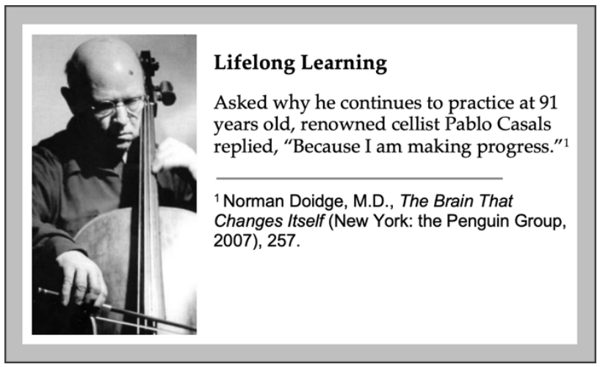 The single most important factor in learning a physical skill is practice; however, "the practice cannot be random," and we "must be focused, the practice must have planned content, and this content must be organized."3 As we practice a particular motor skill, we eventually learn to eliminate extraneous movement and to effectively coordinate muscles to act as a single functional unit.

As we improve, executing the complex motor patterns involved in flying becomes smoother, quicker, more effortless.4 Equally as important, we start to relax. The more highly developed our stick and rudder skills, the more mental energy we can devote to other critical tasks such as situational awareness, risk management, and aeronautical decision making. In fact, overlearning the basics "helps us reduce the likelihood that performance will be interfered with by anxiety and/or emotional arousal."5

If properly managing roll, yaw, pitch, power, straight lines, and curves are the basic skills, advanced skills are "nothing more than the ability to perform the basics under extremely tough conditions."8 Without eventually practicing our stick and rudder skills "in the same context, conditions, and environment in which [they'll] be used, you have no proof that you'll perform the skill[s] well..."9 Once the basics have been developed, the experience needs to be ratcheted up by adding "realistic decision making to the instructional setting" in the "fluid, reactive, spontaneous, stressful environment" of flight.10 This is called scenario-based training. More to the point, this is the loss of control survival training.

Also referred to as imagery, mental training uses "all the senses to develop an experience in one's mind."14 More than simple visualization, it is "tactile, auditory, emotional, and muscular."15 Think of it as your own virtual reality, and "the closer one can come to simulating an actual situation, the greater his chances are of developing the skill to perform in that situation."16

The training regimens of two top competition aerobatic pilots reinforce the role mental training played in their success. They are two of fewer than 50 pilots who have earned the IAC All Ten aerobatic achievement award. Vicki Cruse was a former US Unlimited Aerobatic Champion and four-time member of the US Unlimited Aerobatic Team. Dan Matejczyk had a dominant, two-year run in the Advanced category in California, including back-to-back contests where he broke the 90 percent barrier.17

Here's what Vicki and Dan had to say about practicing smarter.

Vicki: "I'd say I spend almost twice as much time working out all of the mental things than I do actually flying. I always know what I am going to fly before I go out to practice."

Dan: "I estimate at least 80 percent mental work, 20 percent actual flying. This mental work does not include informal thinking while driving or time preparing the plane or doing maintenance."

Vicki: "I now have two small notebooks that I take with me to training camps and contests. In them I have notes from every coaching session with everything from entry speeds, figure techniques, and things learned from specific sequences. When old habits creep back in, I can go look to see how I fixed them previously."

Dan: "I have notes on virtually every practice flight I ever flew. I think the main purpose and value are to close the loop between physical flying and the perception and understanding of flying."

"The essence of coaching lies in helping others and unlocking their potential."18 Steps that not only create confidence in a skill, but also motivate trainees to learn and practice include:19

Remember, "it is easy to design a...scenario that makes every trainee look like an idiot, but all that proves is that the trainers are jerks."20 Professional aviation educators act in the best interest of their trainees. The exceptional ones are distinguished by "their ability to motivate and train students to perform a specific skill in a specific environment."21

Master Aviation Educator Linda Castner combined her passion as a sports coach with her desire to create effective, aviation-themed outreach. Her two-day Women Take Flight workshops included "classroom instruction, experiential training on the ground, and flight experience in general aviation aircraft."22 Participants had not flown an airplane before, and typically had no prior desire to learn to fly.

On day one, participants were taught about roll, yaw, and pitch the same way I teach it to my trainees. For the pre-flight experiential activity, Linda innovated by using a modified wheelbarrow as a three-axis simulator. Participants learned about roll, yaw, and pitch in the classroom, experienced them in the wheelbarrow, and then flew them in an airplane. For consistency, ground and flight facilitators used the same targeted language and techniques throughout the process. The learning not only was fun for the participants, but also was deep and meaningful.

Incorporate the above concepts into your training sessions, starting with the exercises described in the Training Exercises section of the Learn to Turn e-Booklet.

What Should I Know About Flying in the Rain?

How Do You Determine Your Weight and Balance?