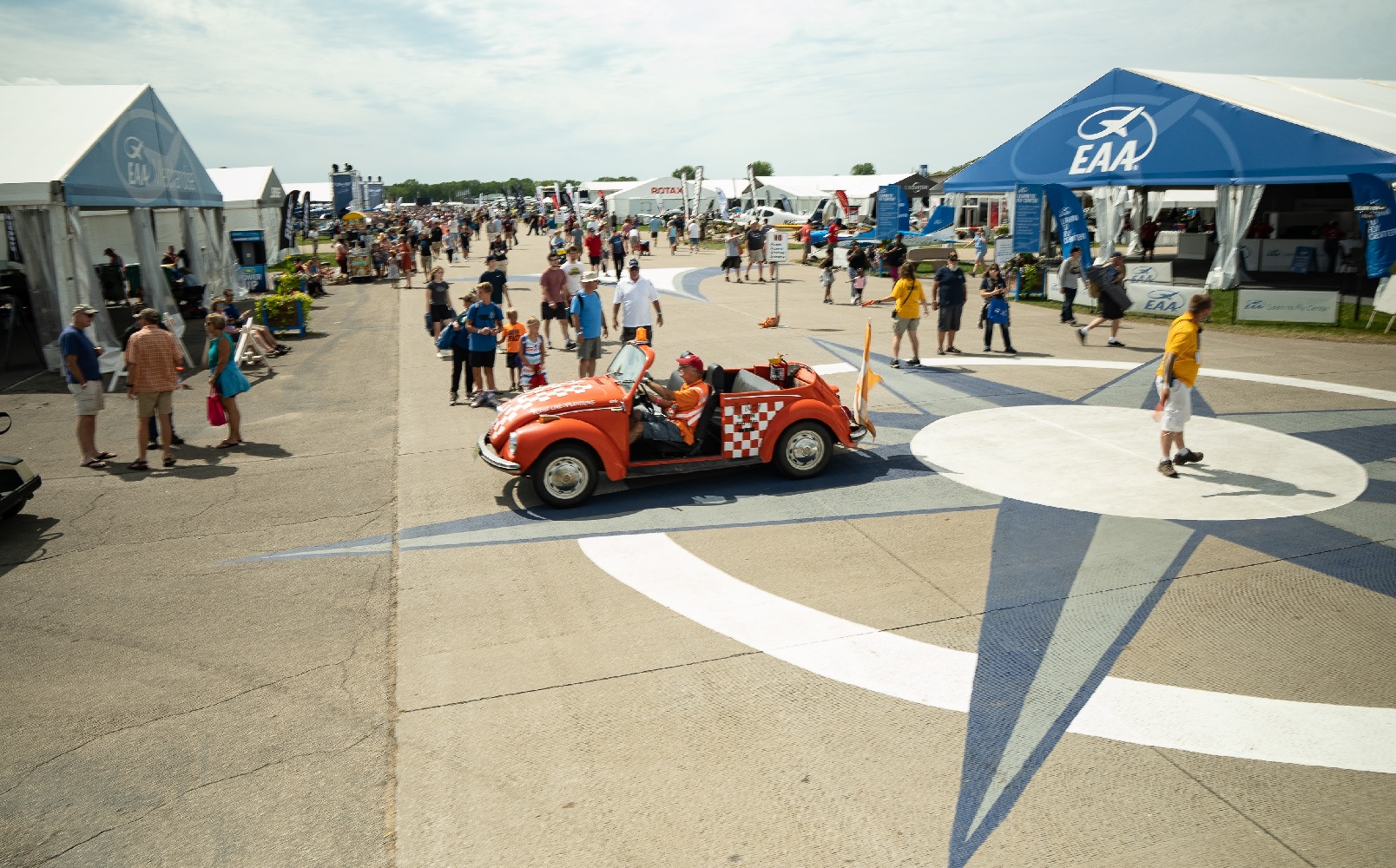 So, I finally went to Oshkosh. After 14 years at SUN 'n FUN in several capacities, I went west to support the cause at that tiny aviation event in Wisconsin. I learned things — mainly that my feet don’t like to stand as long as I forced them to do that. I also learned that general aviation is alive and well. EAA AirVenture Oshkosh 2021 reminded me how much our community relies on its individual members for support, business, and just plain fun.

Most of all, I left AirVenture 2021 with some observations about our wonderful aviation system. I want to share some of these observations with you, and I would be interested to know your thoughts. Treat all that follows as an introduction to a much larger conversation.

No surprise here. This is not some major revelation. However, after walking the grounds and spending some time amongst the hangars and exhibits, I noticed a strong theme. Exhibitors that do not sell flight simulation technology or software had simulation present in their booth solely to lure in passersby.

Of course, there were plenty of simulation-specific offerings in the form of hardware, software, and curriculum. While it's not new to see pilots and aviation lovers eyeball a cool flight simulation setup, I found it particularly interesting how the technology seemed to appeal to all age ranges. The new computer widget always has seemed to get the attention of young people, but I saw plenty of the 60+ crowd jumping in flight simulator cockpits and asking questions about simulation opportunities both at the flight school and at home. Could it be that flight simulation technology is finally making serious headway across the entire age spectrum of general aviation? 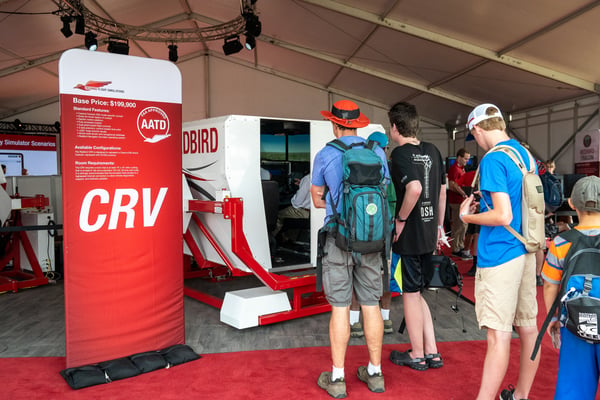 I talked to countless pilots of all skill levels during AirVenture 2021 and just as many student pilots in various stages of flight training. One theme seemed to resonate with all those folks: the need to maintain proficiency without using an airplane.

Regardless of experience or role in general aviation, almost everyone I talked to expressed concern over the time and expense required to stay proficient. No one seemed that concerned about the idea of currency, and I hope we can all agree that true proficiency should be the ultimate goal of every pilot, not just legalistic currency.

Perhaps pilots of all stripes have heard the message that a lack of proficiency seems to correlate directly with a lot of aviation accidents. Perhaps pilots finally drank the 'risk management Kool-Aid' that, for years, they mostly scoffed at as nothing more than a useless soft skill. Whatever the cause, rusty pilots, current pilots, and student pilots all seemed to be very interested in the idea of a custom-tailored, accountability-holding, proficiency-focused training program. They wanted more than just the ability to sit at a flight simulator or an airplane and go through the motions. Uniformly, they all seemed to want to push themselves with fresh content sourced from real-world scenarios. I found this hugely encouraging. I think this is a fundamental shift in our community and an important one.

There is a growing disconnect between flight instructors and flight schools

I met several flight school owners and administrators who either came to talk to me alone or were brought to me by some of their instructors who were also present at the event. While there has always been a rather obvious divide between school owners and flight instructors, I noticed that the gulf gets particularly wide when discussing flight simulation and teaching techniques that can benefit students.

Again, this may not be news to you, but I was surprised to hear flight instructors lobbying for simulation and school owners pumping the brakes. In the past, I had heard flight instructors complaining about the integration of flight simulation in flight schools because they want to log time in the airplane. School owners always seemed to like the idea of simulation because the cost per hour to operate the tech is far less than an airplane with a much higher rate of return per hour.

My experience at AirVenture 2021 was almost completely the opposite. Many instructors I talked to seemed to understand the value of flight simulation, particularly in preparing students for upcoming flight lessons and multiplying their available time using smart technology like Redbird GIFT to help students review and further develop their skills. I heard from several instructors that using the integration with CloudAhoy makes debriefing sim activities simple, particularly when they are are not present for a student's practice session. On the other hand, school owners seemed to fear their flight instructors would not use simulation technology (see above).

How is it that flight instructors and flight school owners and administrators work in concert with one another but miss on each other's priorities so drastically? Have we abandoned the weekly instructor meeting concept? Are we so concerned with getting each student through to certification that we have missed the opportunity to work with our internal teams to ensure we are doing it efficiently and effectively? The answer here might be yes, but there is a simple method to bridge the gap: communication. It was amazing to watch these teams communicate in real-time about how to deploy flight simulation effectively in their flight schools and programs. 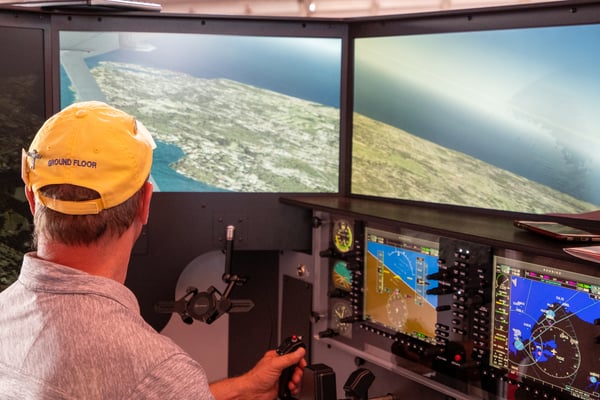 There was a time when I dreaded getting in a flight simulator with pilots over 40 years of age. I just knew they would over-control the simulation and become immediately frustrated with their experience, blaming me and probably the device instead of their lack of familiarity with using simulation technology in flight training. On the other hand, young people either wanted to do barrel rolls or flip every switch and push every button — anything to avoid treating the flight simulator like an actual training aid.

Something is fundamentally changing in this regard. These stereotypes still exist, obviously, but I was shocked by the number of people, young and old, that have embraced flight simulation as a key component in pilot training and proficiency.

For example, I flew a Redbird MCX with a young man, probably 12 years old, who has yet to begin actual pilot training. He wanted to drop the weather to IFR minimums and fly an instrument approach. I was skeptical (see above), but I obliged. Except for helping him load the approach in the GNS530, which he had never seen before, this young man flew an ILS to minimums, and I never touched the flight controls. Blown away, I asked him how he prepared himself to perform at this level. He cited countless hours of home flight sim experience and mentioned how excited he is to begin pilot training closer to his 16th birthday.

There are many more stories like this one, but they all stem back to one key factor: home flight simulation is almost good enough to train pilots. I know that sounds insane. However, if you have experienced real instrument approaches in X-Plane 11, Microsoft Flight Simulator 2020, or Prepar3D v5, especially in VR, you know what I mean.

Certified Basic Aviation Training Devices are now reaching a price point where pilots can own a certified flight simulator at home. We as a training community need to be seriously thinking about how to leverage this learning disruption. It’s not coming; it’s already here.

Thanks for taking the time to read my take on AirVenture 2021! I hope to hear your thoughts on the event and your takeaways from your experience or my thoughts here.

Until next time, fly safely, my friends!

When Is a Flight Too Dangerous To Make?