Many of us like to jump right in and figure out a challenge as we go. The Flying Challenge Cup was designed so you could do exactly that. But if you’ve never watched the introductory videos, there are 3 specific tips in there that could help boost your score.

1) Aim for a Good Landing

The most common score-killer on Precision Landings is from overshooting or undershooting the green touchdown target. The best fix is watching sections 3:22-3:45 and 3:55-4:30 in the video and reviewing the concept of an aiming point.

There are two critical parts to using an aiming point: refraining from pitching up until that target completely vanishes from view, and having just enough energy to float the correct distance as you raise the nose further to bleed off your speed before touch down. Those sections of the video mentioned above, offer technique to do that consistently. Once you can make that transition consistently, you fine-tune it with power. The earlier you reduce the throttle to idle, the shorter distance you’ll float. So if you’re consistently floating too far, reduce power to idle earlier. If you’re consistently not floating far enough, you have two choices. Either reduce power later, even as you begin to raise the nose, or move the aiming point closer to where you want the wheels to touch down.

Pretty soon you’ll be hitting within a couple feet of the mark every time.

2) Get Your Personal Spot Right for Steep Turns

The single secret to steep turns is repeated often in the video: Hold the correct spot where the horizon passes through the glareshield or engine cowling. 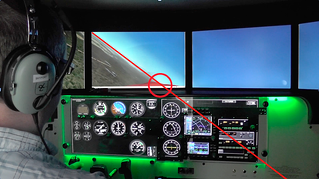 The only tough part is that everyone sees this point a bit differently. So the best thing you can do is get the angle that looks right to you. Once you get that dialed in, it’s like magic. You’ll make steep turns every time with altitude deviations of 30 feet or less.

One other important tip is in the video between 1:30 and 2:00, where it explains how fixing your bank problems first is critical to keeping small problems from becoming big ones.

3) Get Lazier to Master Your Eights

Perhaps the most difficult concept with a Lazy Eight is that while the pitch and bank of the aircraft are constantly changing, you should not constantly move the controls.

This isn’t said explicitly in the video, but what you’ll find is that if you start bank by turning the yoke, and then hold the yoke steady, the airplane will continue to bank steeper on its own. You only need to add more yoke twist when the bank stops getting steeper. The same is true with pitch; pull back on the yoke and then hold it steady. Only add more backpressure when you need to. 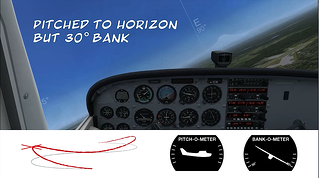 Another tip for Lazy Eights is to just focus on hitting the 90-degree points correctly and not worry about the other scoring points. These points are shown in the video at 00:37 and 00:56, and again at 2:11 and 2:34. If you listen carefully, you’ll hear the stall warning horn in the background during that later sequence. That’s ideal; you should be just a few knots short of a stall when your nose slices through the horizon.

Nail the low speed as well as the zero pitch and 30 degrees of bank at just those two points in the maneuver, and the rest of the stuff will start to fall into place naturally—and you’ll be well on your way to a fantastic Lazy Eights score.